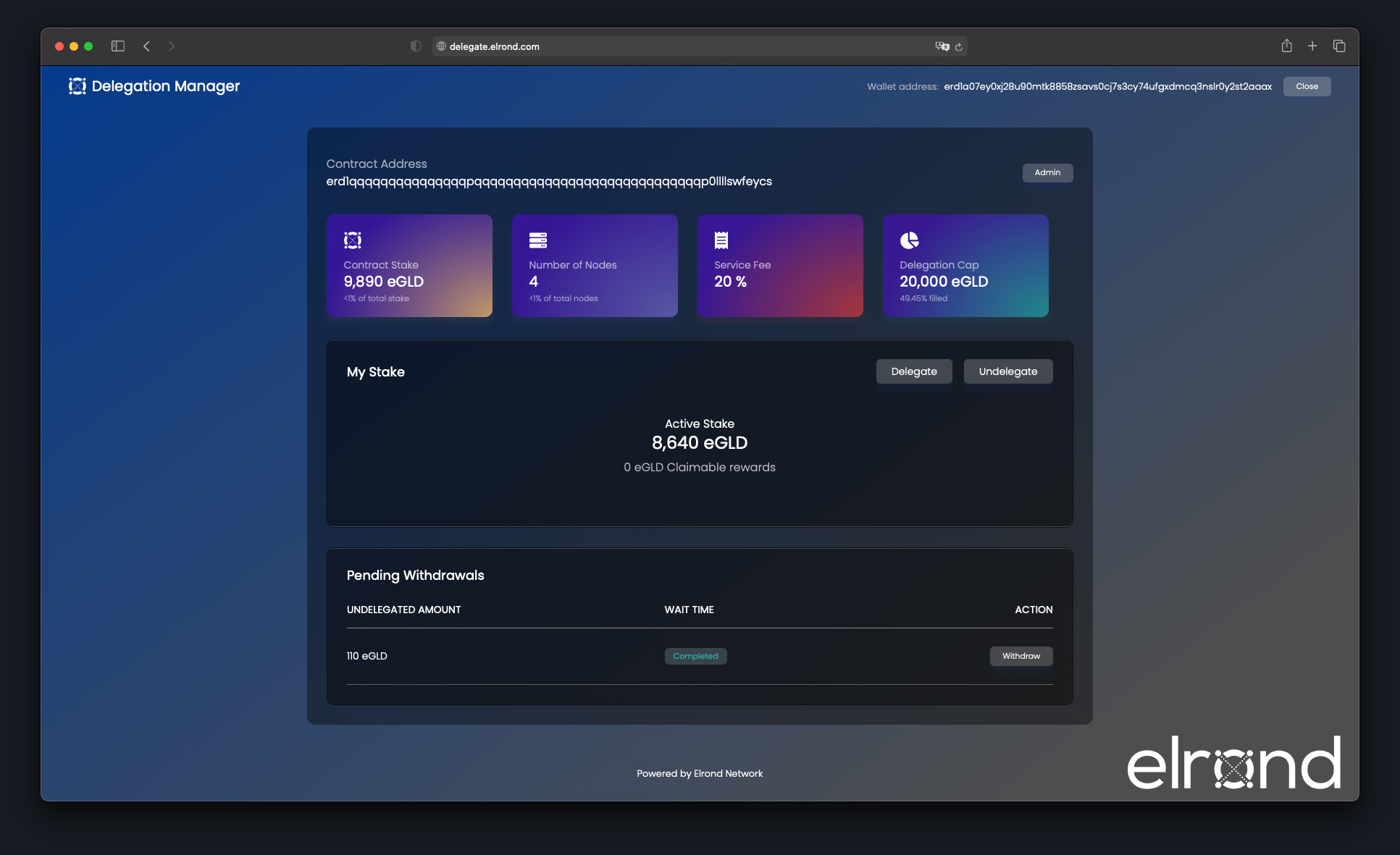 The prospect of decentralized applications creates opportunities for anyone to compete in markets that have traditionally been dominated by larger organizations. Thanks to trustless protocols and comprehensive devkits, the next amazons and googles are perhaps one smart contract away.

But the trustlessness of protocols is just one side of the equation. The other is represented by the networks they run on, and their degree of decentralization. Even the best-written protocol would still be censorable when deployed on a network that is controlled by a small number of entities.

This is why we are excited to introduce the Elrond Delegation Manager: a comprehensive set of tools that anyone can leverage to operate Elrond Validator nodes with funds delegated to them by third parties.

The most important part of this tool is the Delegation System Smart Contract, which is part of the protocol. This is a key characteristic that drastically reduces the complexity of setting up new validators and makes the interaction between delegators and staking providers genuinely trustless.

It is complemented by the Delegation Manager Dashboard, a beautiful, intuitive, and open-source interface that anyone can deploy to engage their customers, partners, or friends and operate Elrond Validator nodes.

As usual, Validator operators need to do the heavy lifting. They can set up a staking pool with 1250 eGold as collateral, by sending a simple transaction:

This creates a staking pool with 1 node by default and 1250 eGold in it. The transaction sends back a reply indicating the smart contract address in hex, which can then be converted in bech32, using a converter.

They can then deploy the Delegation Manager Dashboard on their respective websites, for their customers to use. As funds are delegated to their staking pool and the necessary 2500 eGold base stake is accrued, the node included in the pool becomes a validator, starts earning staking rewards and distributes them to the delegators participating in the staking pool.

Additional eGold can be delegated to the pool, up to the maximum amount specified by the staking pool operator. As more funds come in, more nodes can be added, assuming there will be sufficient capacity in the network. Find more details in our Phase 3 Staking Proposal.

The Delegation Manager Dashboard is free and open-source, you can try it here:

After the setup process, Validators can use dedicated transactions to manage their staking pool, or they can simply use the dedicated Delegation Manager interface:

When accessing their preferred Staking Provider’s website, delegators will be met by a beautiful and intuitive interface that allows them to immediately assess the parameters of the staking pool and quickly engage with it.

The non-custodial process automates the delegation activities by redirecting to the Elrond Web Wallet, where the user signs in using their preferred method, i.e. Ledger or keystore, and is prompted with a transaction containing the precise address, gas, and smart contract data for performing the intended operation.

This frictionless process will soon be available in Maiar, where users will be able to select from the staking providers listed in the app and engage in the Elrond staking economy with the tap of a button.

By embedding the delegation functionality inside the protocol as a system smart contract, the risks of malfunctioning, compromised, or malicious third party staking smart contracts are eliminated.

The intuitive interface kit that any staking provider can use to rapidly engage customers broadens the array of infrastructure providers that can engage with the Elrond Network.

Whether by enabling professional staking providers to focus more resources on their core differentiators or by lowering the barrier for enthusiasts to join forces and run their own community validator, the Delegation System Smart Contract & Delegation Manager Dashboard combine into a powerful toolkit ensuring the last step toward full decentralization.

They will enable anyone, anywhere to both use the services of the new internet economy, as well as to engage with operating and securing them, therefore enabling end-to-end decentralization at a truly global scale.

The capabilities are live on our public testnet and will soon be available on the Elrond mainnet following its next major upgrade. Join the Elrond Validators community and become part of the fastest-growing decentralized ecosystem that is building the new internet-scale digital economy.

How to send and store your Elrond NFTs in your Ledger Nano... read more 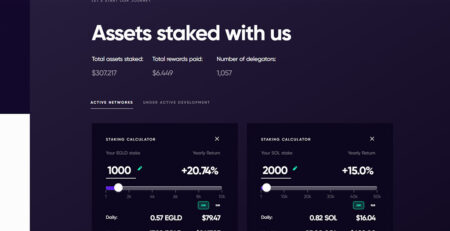 My 4 best trusted validators to stake your EGLD eGOLDI present you... read more

I am known in the trading community as Crypto Mercy, I offer analytics on the TradingView platform. I am originally from Canada and have been part of the cryptocurrency community for 3 years now. I help many people understand the fundamentals of different projects, i help them understand how to invest in one project rather than another by making them understand the different aspects that are important to consider in this environment.